This was my biggest contribution so far! And it was a bit more involved than I expected, so I wanted to write down what I learned. 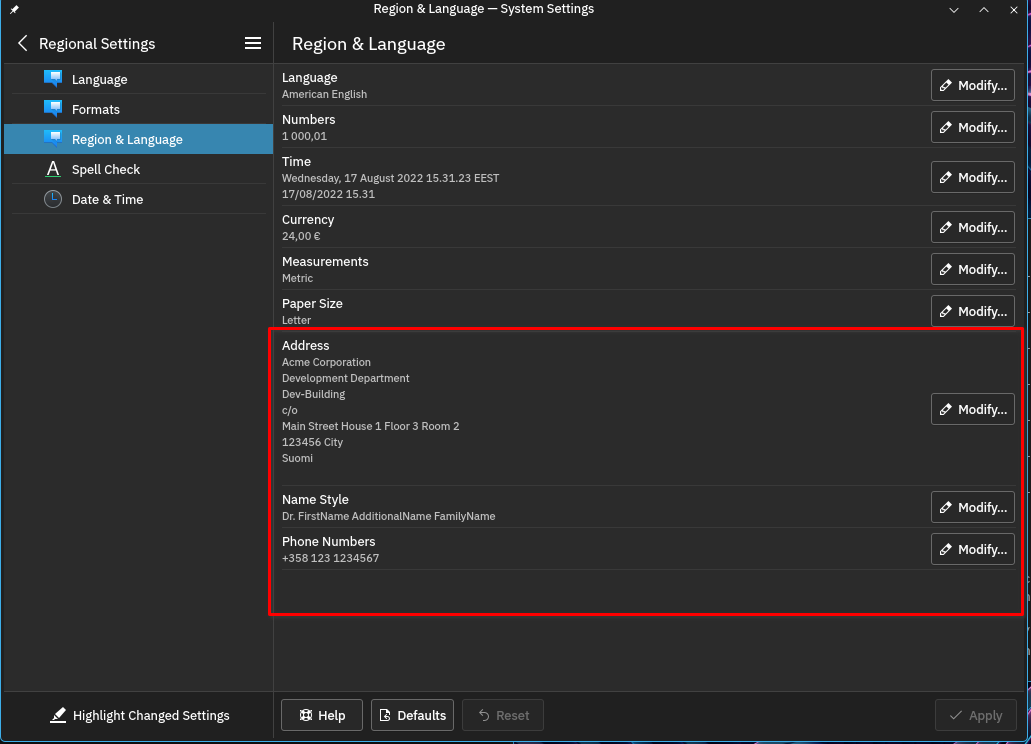 I added the settings there that are in the red box. I also added the Paper size setting earlier in another contribution, but it was pretty simple.

This was not, since Qt did not have builtin functions for these three settings: LC_ADDRESS, LC_NAME and LC_TELEPHONE. I assume it’s because only glibc has these settings.

Before I go any further, you can look at the commit in here: Add LC_ADDRESS, LC_IDENTIFICATION, LC_NAME and LC_TELEPHONE to region settings

The settings part themselves

Most of the settings was actually easy to implement, since I could follow the old parts of the code and just reimplement them separately for the LC_ADDRESS and friends.

What gave me most trouble though, were the examples. My post will be mostly about them.

Figuring out how to parse stuff

To get a nice example to see what the locale you’re setting looks like, we have to pull the format string from the locale object/file.

Yeah, fun. This website was REALLY helpful during making this: https://lh.2xlibre.net/locale/fi_FI/

Archive it, cherish it.

I was going to make my own silly regexp parser thing, but luckily KDE has something called KMacroExpander::expandMacros, that takes a hashmap and the format string. I gave the job to that method and it returned a nice parsed string.

However… How to get the correct locale? Now THIS, THIS was pain.

I just wanted to tell the C function that hey, I got this locale, how to get it’s format string?

After hours of searching, nl_langinfo_l seemed the obvious choice. Except that you need to give it locale_t struct and I still don’t know what could give me that struct. There was only ways to make new locales with newlocale and meanwhile it could duplicate existing locales, it also required locale_t.

I tried to make my own locale_t at first since I couldn’t find any getlocale_t functions. It was messy and it didn’t work, so I just groaned and tried to just use nl_langinfo. What this does is that it gets the information of the locale that is currently active. Close, but not quite.

Due to being unable to get locale_t anywhere, I decided to do something a bit dirty. I set the locale that the example is for with setlocale. So when the example is being built, the locale is active, and thus nl_langinfo can get it’s data, without me having to create a new locale_t by hand.

It is not ideal solution. I got asked about it many times. But when I asked how to get locale_t, it was just nowhere to be found. Nobody knew, and I don’t blame them. I quickly learned this locale stuff is pretty much dark wizardry that only few understand.

At least the examples were finally working and I didn’t see any weird side-effects.

If you, my dear reader, know how to get locale_t from QLocale, do share and I’ll do this the proper way.

What if the locales are not generated

I was told quickly that this will not work, if there’s no locales generated and all the locale files are still in the /usr/share/i18n/locales/.

So you gotta parse those files. Have fun!

Well, I did actually. It sounded more difficult than it was, but with simple regex I could get the right value: The locale files in the folder were pretty well formatted, so it was quite easy to regex through it. I had to just look for the name of the format, for example postal_fmt, then whitespace, then match and capture the value.

Of course, I didn’t loop through all files, but only the file that matches the locale name. So for fi_FI locale we only look for the fi_FI file.

Getting language code from the locale

After the examples were done, we wanted to localize the examples to the native language of the locale the example is shown for. So Finnish address example actually is in Finnish, and not in English.

This felt a bit silly and I feel like there should’ve been better way to do this.

I could not figure out how to get the locale language shortcode from the locale name.

So the en part of en_US. I couldn’t find anything that does this in Qt libraries, there were methods that return the full name of the language but not the first part.

This regex first looks for and captures as many lowercase letters there are, then ends the capture when either meeting end of string or \ or -. I am not sure why I added the \ there but I do remember the locale.bcp47Name() returning locales with \ too. Or I was just sleep deprived.

Anyhow,do share if you have an idea for simpler solution, be it simpler regex or “you should’ve just used this one hidden function.”

Some things I learned

Here’s few things I learned thanks to the reviewers:

Feel free to tell me if you know better why some things are like this. Most of these are based on my own experiences.

So yeah, it was way more involved than I expected. I was honestly expecting Qt having some premade classes and methods for the locale trio, but nope. So I had to get my hands dirty and do it myself.

I may sound grumpy in text but I legit enjoyed it even it was quite challenging for my tiny brain. I’ve never really worked with C++ before due to people scaring me that it’s a scary spooky hellish language.

Well, it certainly is a bit scary language. But I managed to make something nice with it.

Also there was no need for me to be scared of the review process. It was actually super educational and I learned a lot from it. I am thankful for all the people who helped me work on this!!